First Vienna Football Club 1894 is the oldest football club in Austria. In addition to its many years of history and tradition, the club boasts a lively and colourful fan culture. First Vienna fans have presumably been around since 1894. From a glance at the archives, you can quickly tell that significantly more spectators flocked to Hohe Warte Stadium for games involving the national team than for those involving Vienna. But that being said, there has always been a loyal crowd over the decades – and certainly one or two hardened away fans who have accompanied First Vienna on their travels.

The origins of a "fan culture" – that is to say, an organised fan scene – at Hohe Warte can probably be traced back to the end of the 1980s. It was then that the so-called “Kleine Pommes” (Small Fries) – which later became “Döblinger Kojoten” (Döblinger Coyotes), "Weirdoz", "Old Firm" and "Yellow Submarines", as well as other smaller fan groups with some degree of organised support, laid the groundwork for the lively fan culture that has developed over the years. It was strongly oriented towards the British style of support, which was also evident from the songs on offer. 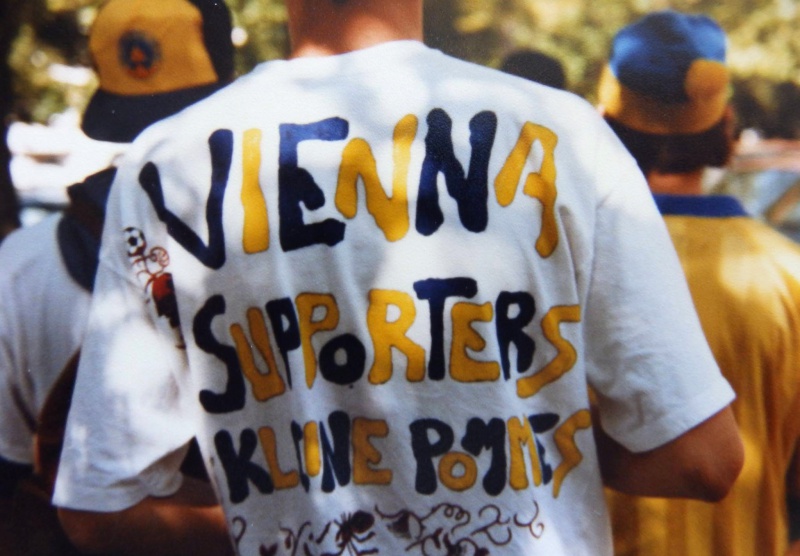 Despite the loose organisational structure, joint trips and fan tournaments were soon organised while fan merchandise and fanzines were produced. As a result, more fans found their way into the fan block in the ‘90s. The true trademarks of the Blue and Yellow fan culture are without doubt getting behind the team and treating opposing fans and players respectfully. Even the sporting decline to the depths of the Regionalliga in 2001 did not prevent fans from cheering for Vienna on a Friday evening at Hohe Warte or at various sports grounds across Eastern Austria.

As part of his sociological thesis “Blau-gelb ist mein Herz – ich sterb in Döbling” ("Blue & Yellow is in my heart – I die in Döbling"), the author of this article puzzled over what motivates the First Vienna fans – and did not come to a clear answer as to why people put themselves through it :-). But in summary it can be said that in addition to the emotional connection and identification with the club, plus the tension that comes with watching the game at the stadium, it is primarily the social aspect of visiting the stadium that serves as motivation for the fans. 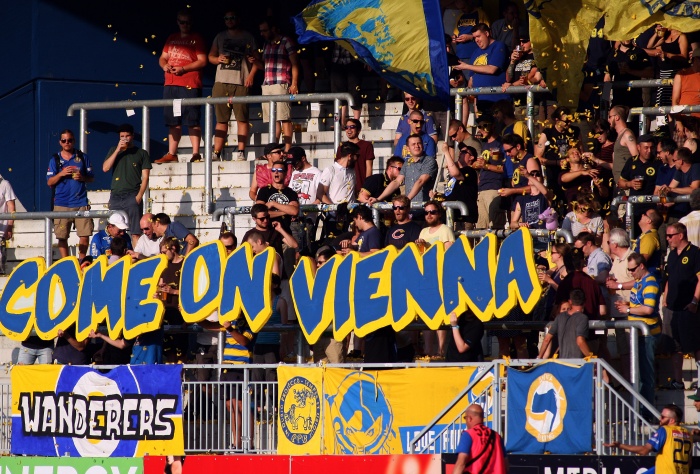 The shared enthusiasm and loud cheering, especially within the fan block, as well as the discussions that take place before and after the game, are just as important as the game itself. And those who have made regular pilgrimages to Hohe Warte Stadium over the years or made their way to the Tennis Parlour after the games will find a place for themselves in the "Vienna Family". As Vienna fan "Mix" puts it: "This is something beyond the ordinary – difficult to explain – something you simply have to do." Insights into the long-suffering souls of the Blue & Yellow fans are provided by the documentary film "Es geht sich immer nicht aus" ("It always doesn't work out") – which, by the way, I strongly recommend to readers who are not familiar with it!

Contrary to expectations, new fans continued to join the long-serving supporters throughout the years in the Ostliga, the third-highest league in Austria. You can see that at home games too – the fan block at Hohe Warte Stadium has grown significantly over the years, with new supporters and fan groups enriching the Blue & Yellow fanbase. “Vienna Wanderers” breathed new life into the fan block (choreographies, new songs and fanzines, etc.), while other groups such as “Antifa Döbling”, “Partizan Rothschild” or the “Plüschponybande” nowadays also form an active part of the fan culture landscape in Döbling alongside the older fan clubs. Happily, the proportion of female fans has also increased steadily during this growth process. 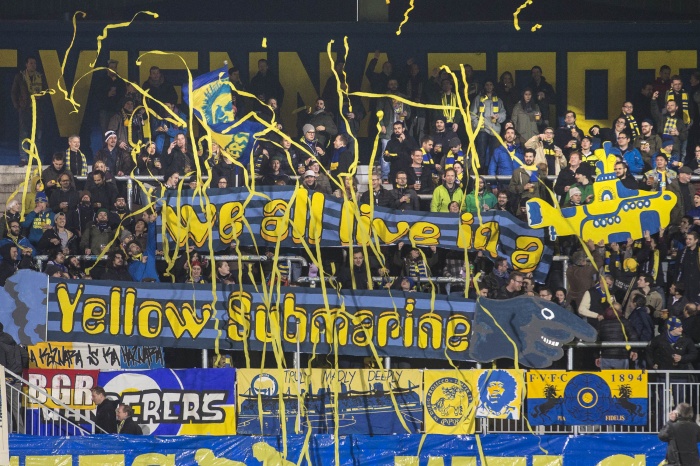 The fan culture at Hohe Warte Stadium continues to stand out for its great diversity, which is what makes it so appealing. Despite the fanbase consisting of people from all walks of life, the “Vienna Family” advocates the following basic principles: supporting the Blue & Yellows; refraining from homophobic, racist, sexist or derogatory statements/hostile behaviour; and avoiding violent confrontation! We also promote this through regular campaigns (choreos, fan articles, fanzines, banners, stickers etc.) inside and outside the stadium. In addition campaigns against homophobia, racism, repression and deportations, the self-organization of the fan curve was an especially important step.

With the club in a difficult sporting and economic situation in 2014, a motivated team of supporters from different fan clubs succeeded in launching an umbrella organisation: the "First Vienna Football Club 1894 Supporters". It is the central point of contact for all those with an affinity to First Vienna. The aim of the initiative was to bring the Vienna family closer together and to pool the fan block’s creative potential in order to support our team in the best-possible way and to help shape club life more actively. 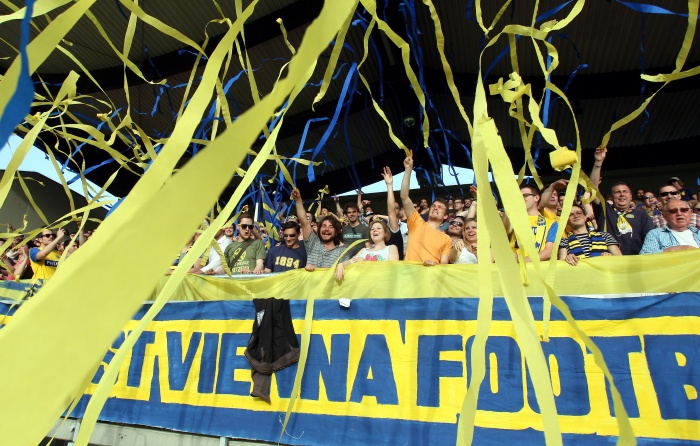 In the past, fans showed their support for the club by helping with infrastructure improvements at Hohe Warte Stadium and the Youth Centre in Spielmanngasse, as well as by producing fanzines or posters at their own expense – which contributed to drawing interested parties to the home games. In addition, there have been several legendary initiatives, including large choreographies for the 120th and 125th anniversaries.

In its short life, the Vienna Supporters umbrella association has already gained over 100 members and we would definitely like to get even more Blue & Yellow fans on board. Right now, it is important to keep growing the potential fanbase in order to avoid descending into footballing insignificance. Even if the lower leagues may have their benefits for some fans, the mid-term objective must be to get back up to the top tier. 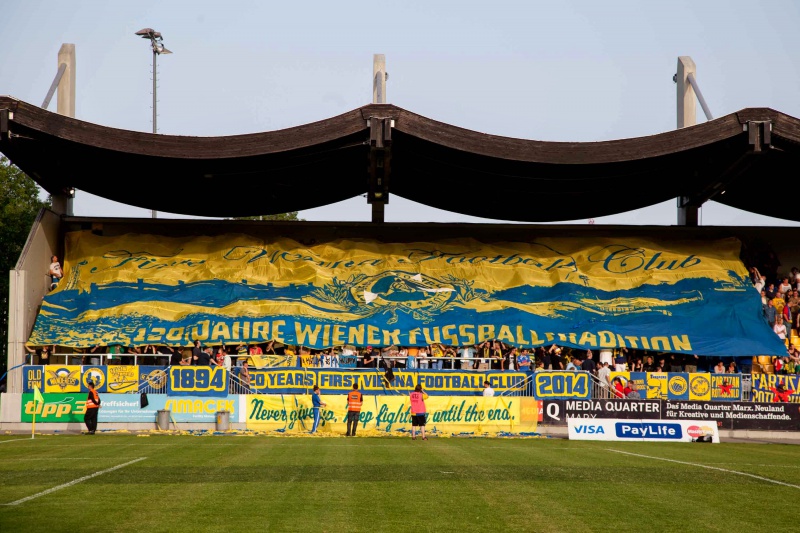 First Vienna, the oldest football club in Austria, celebrated its 125th anniversary on 22 August 2019. Despite relegation to the fourth tier, we fans want two things above all: for Vienna to continue to play its home games at the scenic Hohe Warte Stadium and for the club to remain on a sound financial footing in the long term.

But this realignment of the club can only succeed if all the parties involved pull together. It is essential that there is mutual respect and that the club officials implement a transparent information policy vis-à-vis the members, the sponsors and, above all, the fans.

Finally, I would like to leave the Blue & Yellow fanbase with the following quote by First Vienna veteran Curt Reinisch:

“In good times you can easily be a Vienna fan, but in bad times you have to prove that you are Blue and Yellow. You just have to stay loyal to the club!”